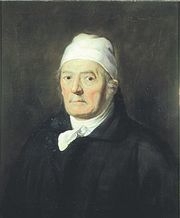 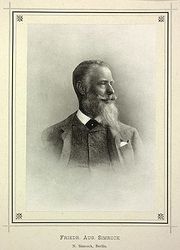 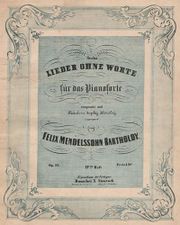 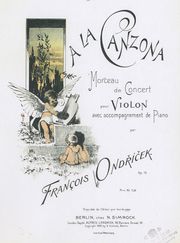 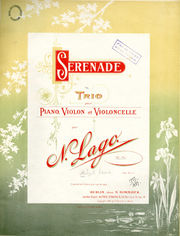 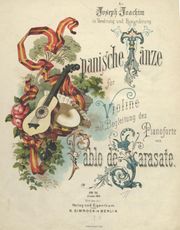 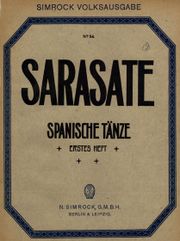 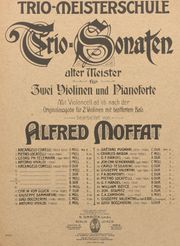 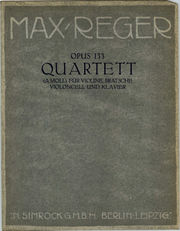 This long-standing German publisher (nearly as old as Breitkopf and Schott) is most famous for publishing Brahms' and Dvorak 's works in the 19th century.

The firm was founded in 1793 by Nicolaus Simrock (1751-1832) in Bonn. This city, like Mainz, Schott's home, equally on the Rhine, was a historically important city, since it was the seat of the Archbishop-Electors of Cologne. A Paris branch was opened in 1802 by Nicolaus' brother Heinrich (Henri) (1754-1839). Nicolaus' son Peter Joseph Simrock (1792-1868) opened a branch in Cologne and took over management of the firm after Nicolaus' death.
The mid 19th century saw dramatic changes. Peter's son Friedrich August "Fritz" Simrock (1837-1901) inherited the firm in 1868 and moved the principal office to Berlin in 1870 under the name of Simrocksche Musikhandlung. At the same time, he sold the music shop and outsourced the engraving and printing business to Röder in Leipzig. It was Fritz Simrock who published Brahms' works from 1860, and Dvorak's international reputation was greatly helped by Simrock's publication of Klänge aus Mähren, Op.32 in 1877. From 1872 his wife Clara (1832-1928) conducted a salon in Berlin which played an important role in the development of the company. The publisher Robert Emil Lienau wrote: "In seinem Heim „Am Carlsbad 3“ war Frau Clara die liebenswürdigste Herrin und Wirtin. Die Musiker und Künstler des Verlages gingen dort ein und aus, und diese ungezwungene Gastfreundschaft war das feinste Werbemittel für den Verlag."

After Friedrich August's death in 1901, the company was transformed into a GmbH (limited liability company) and led by his nephew Johann Baptist "Hans" (1861-1910). The same year, he created the Simrock-Volksausgabe, a series of works still under copyright, but in high quality and at reasonable prices. Johann Baptist established a subsidiary in Leipzig in 1904, and set up agencies in London, Paris and New York at about the same time. Simrock absorbed the firm Bartholf Senff in 1907. In 1923, Fritz Auckenthaler, a grandson of Friedrich August, became leader of the firm. The publishing company Eos was absorbed by Simrock in 1925.

In 1929, N. Simrock was sold to the firm Anton J. Benjamin, who continued to use the Simrock name as an imprint. In 1938, the Nazi regime forced the sale of Simrock and other parts of Benjamin to Sikorski from Richard Schauer who then owned the company.

The end of the war brought better times for the company. After a long restitution process, in 1951 the firm's ownership was returned to heirs of the Schauer family (owners of Benjamin), who continued to employ the Simrock imprint as part of their Benjamin-Rahter-Simrock division. It was to a great part due to the Simrock original editions (Simrock-Originalausgaben) that the company regained its former significance and soon again edited contemporary compositions.

Like many other publishers, the period 1990 onwards was a time of consolidation into increasingly large groups. In 2002, N. Simrock was, together with Benjamin, sold to Boosey & Hawkes. Owing to the widespread renown of N. Simrock, the series Simrock Original-Edition was created. It includes a great part of the Benjamin editions, also some that formerly were part of other Benjamin series.

Recent publications by Simrock often - perhaps always - have edition numbers without plates (e.g. "Elite Edition 1247 Simrock" may be found on a 1970s score, but not an expected 5-digit plate.)