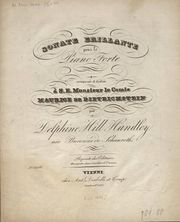 Anton Diabelli (1781-1858) made his first forays into the world of music publishing by publishing his own works on a subscription basis, as he was a composer of no mean talent. However, he only started a firm on contacting Peter Cappi (nephew of Johann Cappi, who worked with Artaria), and thus the name was Cappi & Diabelli at first. They showed a remarkable propensity for publishing popular and lasting compilations and anthologies of contemporary music.

Diabelli, musician as he was, could recognize good targets for publishing, and made somewhat of a name as a publisher with Schubert's works. He not only published first editions of Schubert's earliest opus numbers, but quite a few later (such as the earliest extant edition of the Quintet that we have). Indeed, he managed to publish Opp. 17 and 12-14. Of course, he also published the Diabelli Variations of Beethoven to complement Vaterländische Künstlerverein, a compilation of variations by various well-known composers, of which Beethoven's "one variation" was supposed to be a part. This anthology is actually very interesting, historically. Supposedly, the purpose of the variations were to be a "patriotic anthology," showing off Viennese talent. However, what he really accomplished was to show off his own contact prowess and establish himself as a publisher.

In 1824, Cappi retired, causing the rename of "Anton Diabelli & Cie./Comp." This period was easily the firm's most productive. Upon Schubert's early death in 1828, the firm acquired a large chunk of his manuscripts from his brother, Ferdinand, and thus continued to champion his music. Diabelli proceeded to purchase several other publishers, including Leidesdorf and Artaria, among others. Cappi's replacement, Spina, took over upon Diabelli's death in 1858. He renamed the firm "C.A. Spina, Vormals Diabelli." The productivity of the period is evinced in the 8000-odd plate numbers between 1825 and 1858. They purchased Pietro Mechetti's firm in 1855, adding another 6000, and eventually stopped, at 24,670. In 1872, the firm acquired the catalogue of one A. Bösendorfer, but was soon purchased by Friedrich Schreiber. Schreiber then merged with August Cranz, and in 1879 the company was officially named part of August Cranz.