The company was founded in 1814 in Hamburg. The company bought publisher Friedrich Schreiber in 1879 after a fusion in 1876 - becoming the main publisher of the Strauß family. The Schreiber purchase included the older Viennese catalogues of Diabelli & Cappi, C.A. Spina, and Pietro Mechetti.

Cranz took over the Hamburg publisher Boehme in 1886, thereby acquiring a large catalog, built up since 1795, and a 300,000 volume lending library. Offices were opened in Brussels (1883) and in London (1890). In 1897 the headquarters were moved to Leipzig, the same year in which August Alwin Cranz (Hamburg 1834 - Vevey 1923) took over his father's company. Famous names of the house include Johann Strauss II, Josef Strauss, Clara Schumann, Max Bruch.

In 1949 the company moved to Wiesbaden in Hessen. It was finally sold to Schott in 1992 who still use the Cranz imprint, especially for Strauss family works. 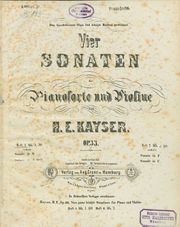 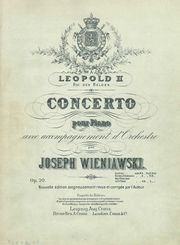 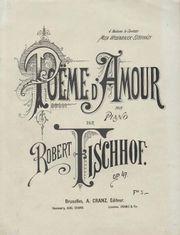 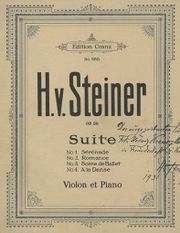 Note: Cranz imprints with plate numbers bearing prefixes of C.S. or F.S. are reissues of items originally published by C.A. Spina (1852-1876) and their successor Friedrich Schreiber (1876-1879). The Diabelli-Spina-Schreiber catalogue was more than 22,000 titles when absorbed by Cranz in 1879. Cranz also employed the prefix A.C. or C. Dates in italics are estimated.

* The 1965 copyright claim is a scarecrow notice.