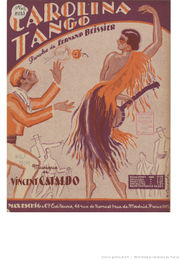 Max Eschig (1872-1927), from the Czech part of the Habsburg Empire, founded his firm in Paris in 1907. His first project was to produce French versions of the immensely popular Viennese operettas such as The Merry Widow by Lehar, as well as those of Fall, Stolz, Straus, Bromme, Kollo, Granichstaedten and Kalman. Thus Eschig was similar to Salabert, the giant of French musical comedy, and also Chappell of London and T.B. Harms of New York. Eschig's successor Eugène Cools, (director 1927-1936) sought out French talent in musical comedy: Hirchmann, Berthomieu, Gavel, Coullon,and Renieu.

The firm then specialized in contemporary French composers such as Satie, Koechlin, Tournemire, Ravel, Milhaud, Honegger, Poulenc, and Sauguet. This was partly the result of the purchase of E. Demets, the publishers of Ravel's Pavane, (by 1923) and La Sirène Musicale.

The firm was bought by Durand in 1987 and is now part of the Durand / Salabert / Eschig/Ricordi conglomerate initially owned by BMG and in 2007 sold to Universal Music Publishing Group (no relation to Universal-Edition Vienna).