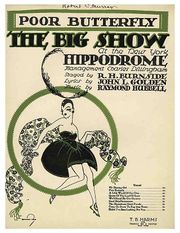 Harms was the largest publisher of popular sheet music in the United States in 1920. This was at the height of the pre-radio, film, and record era, when fortunes could be made from only two sources: live performances (vaudeville and theatrical shows) and printed scores. The business talent which propelled Harms to this position was that of Max Dreyfus (1874-1964), not the Harms themselves.

Much earlier, in 1875 the two Harms brothers Alexander T. Harms (1856–1901) and Thomas B. Harms (1860-1906) founded a music publishing firm in New York and named it T.B. Harms & Co. It succeeded in promoting popular sheet music in spite of the limited mass media of the time. Among its successes were When the Robins Nest Again (1883) and The Letter That Never Came.

Twenty-five years later, in 1901, the enterprising Max Dreyfus (1874-1964), a musical arranger, bought a 25% interest in the firm and within three years (1904) bought the firm outright, keeping the name T.B. Harms & Co., Inc. He had a unique ability to find new composers, and within ten years he had signed nearly every significant popular composer of the day: Jerome Kern, George Gershwin, Vincent Youmans, Richard Rodgers, and Cole Porter. The firm's proximity to America's theatrical music mecca of Broadway was a great help.