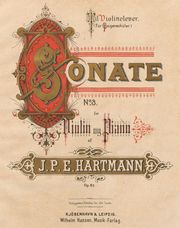 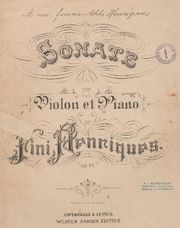 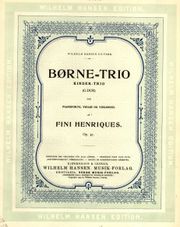 typical cover with the Viking character (1919)

Hansen of Copenhagen, Denmark has been the major publisher of Scandinavian music. Founded in 1853 by Jens Wilhelm Hansen. Hansen's two sons Jonas (1850-1919) and Alfred (1854-1923) joined the firm in 1874, the year before acquisition of the Copenhagen publisher C. E. Horneman.

As with many publishers, Hansen more often provided scores with edition numbers than with plates in the 20th century (or at least both: so Henk Badings' 4th piano sonata has plate 26533 and is "Wilhelm Hansen edition, nr. 3816", the latter bit of information more often provided- in library catalogs anyway? - than the former...) Imprints use other plates (Nordiska Musikforlaget kept N M S even after purchase by Hansen, for example.)