Yeah, it's finally settled (sort of). I'm going to completely go against what I told you to do in the previous post about instrumentation, so sorry for confusing you :). It's no longer necessary to include "1 violin, 1 viola, etc", because it gets cluttered. It may be a good idea just to read this for all information regarding the "general information" place. With kind regards, BKhon 02:49, 20 September 2010 (UTC)

Hi Schissel, in the future when you add anything from Sibley or from any other place for that matter, could you also add the plate numbers to the Durand page when it is published by them? As you can see, we have a fairly large list of plates which comes in very handy, and additional ones only increases our ability to accurately date publications published sans date. Thanks! Daphnis 15:05, 20 September 2010 (UTC)

Also, forgot to mention that if you could keep to the system I've established of dating pieces it would be helpful. For example, dates that appear "plain" are those printed on the actual score in question, those in parenthesis are not printed but are confirmed through some other definitive method (thematic catalogue, Grove, dépôt légal, etc.), and those in parenthesis with a question mark are dated solely on their surrounding plate ranges. Thanks again. Daphnis 16:51, 20 September 2010 (UTC)

Hi Eric. When creating page titles for works that aren't in English, could you bear in mind the language capitalization rules in IMSLP:Score submission guide/Manual of Style. So, for example, "‎L'Automne-Valse" should be "L'automne-valse". Thanks — P.davydov 07:39, 23 September 2010 (UTC)

All Parts Vs. Complete Parts

Sorry to keep nagging you :). Your files are practically perfect at this point, except that it's not necessary to capitalize any instrument. This includes first letters. Kind regards, BKhon 21:58, 30 September 2010 (UTC)

Hi Eric, Than you for your kind message on my page and your solicitude. I don't work with those instruments. No matter I'll go on my own. I'm preparing a great laundering. Thanks again ! Squin 16:29, 1 October 2010 (UTC) Oh, I've no problem with speed.. The problem is with scores I've upload page by page and convert into pdf where every page is noted gallica.. I'm removing uploads my dear friend Rameau first....What a pity ! Squin 16:39, 1 October 2010 (UTC)

If you've got an idea

Dear Eric, I'm not quite sur to have correctly understood your precedent note on my page... my english is not so far as your french but approximate. You're informed with my problems....may be have you got a technic or idea to remove quickly the problematic reference "source gallica.... " on the bottom of each page in my manuscripts uploads (please take a look on my message i put today on Carolus page) may you take a look also with Jean Gille's Requiem manuscript for exemple ...Many many thanks Squin 14:22, 2 October 2010 (UTC)

See my talk page. I don't think the little "source gallica" which appears at the bottom of these pages is a problem from a trademark or logo standpoint. At least for now, I see no need to remove all of them - only the separate pages making a type of quasi-copyright claim. Carolus 23:30, 2 October 2010 (UTC)

It looks like Massenetique actually uploaded this on Sept. 29, so I deleted your upload as a duplicate. I included all of the useful information you provided about this adaptation on the file entry, so nothing was lost except the duplicate file. Carolus 23:27, 2 October 2010 (UTC)

Where and when did you hear it? It would be interesting for me to know! Do you know if it was ever published? If it was I might be able to scan it soon, but if not it will take some time before I get to do any editing on that. Asj 20:39, 3 October 2010 (UTC) I've haven't had the time to listen to any recordings, that will have to wait untill next week, but I been able to get a pdf of a scan of the original orchestral manuscript (it was never published). I can't upload it yet however.... Since I'm relying on the trust of the library housing the manuscript I cannot take the risk of of uploading the risk without their permission (I do a lot of typesetting and editing of never-published norwegian music so I need their goodwill). But I will see what I can do... Asj 15:15, 7 October 2010 (UTC) This work, as part of his complete works, including sketches and so on, will be scanned within the next couple of months or so by the National Library of Norway (I'm now engaged to choose and make the manuscripts ready before digitalization for this institution as part of Norway's Musical Heritage Project). When it will be available on the net, I will post you here when it's available for download. Asj I'm not in charge of the printed music project, but I might have some influence, we'll see. I'll keep you posted. (BTW His second opera "Der Fischer" has been recorded and will be released sometime this year... I'm writing the liner notes so I can assure you, this is better than Thora ;) ) Asj The full score, composer's program and string parts are now all available in manuscript scan. Enjoy! Asj 08:24, 12 September 2011 (UTC)

Hi Eric. Thanks for your help with the templates. Could you use "Friedrich Chrysander", as there's some doubt over his middle initial? (See: Wikipedia). Thanks — P.davydov 22:59, 3 October 2010 (UTC)

After a discussion on Carolus page, i realised that the problem wasn't what i thougt, so it was a misunderstanding. Only one upload was wrong, where i had forgotten to remove that page, the reference gallica on bottom of some others making no problem. I feel much light. However It gave me the opportunity to see you're a very friendly guy. Merci beaucoup. Squin 06:01, 4 October 2010 (UTC)

Hello Eric. Yes, that's sure he died in 76.. so, I've just mentionned his name in the Edition Mutuelle page. Don't worry, I'm very very serious. Do you have news about Koechlin ? I've read some words about your letters with his family for copyright. I'm a big big big fan... Squin 12:45, 8 October 2010 (UTC)

Sorry, I forgot to put the pipe after "Ticcor" (i.e. {{LinkArr|Ticcor|}}), which fixes the template.

Outstanding catch of Peter's reprint of the Pöhle. It looks like they added their own publication info and measure numbers, but the engraving definitely looks earlier than anything produced in Leipzig in the 1930s. Carolus 03:47, 12 October 2010 (UTC)

Just a quick note to say that we have an "ave maria" tag, so this should have that tag rather than "hymn". I've changed it already, so it's just if you come across another one. (Steltz)

Hi, just a hint how to get a better resolution: Right mouse click on Access bitonal (TIFF - ...) and save the tiff-file, then Next Page, save again, etc. Open the images with IrfanView and print/combine them with pdf creator for example and generate a pdf. I've replaced this 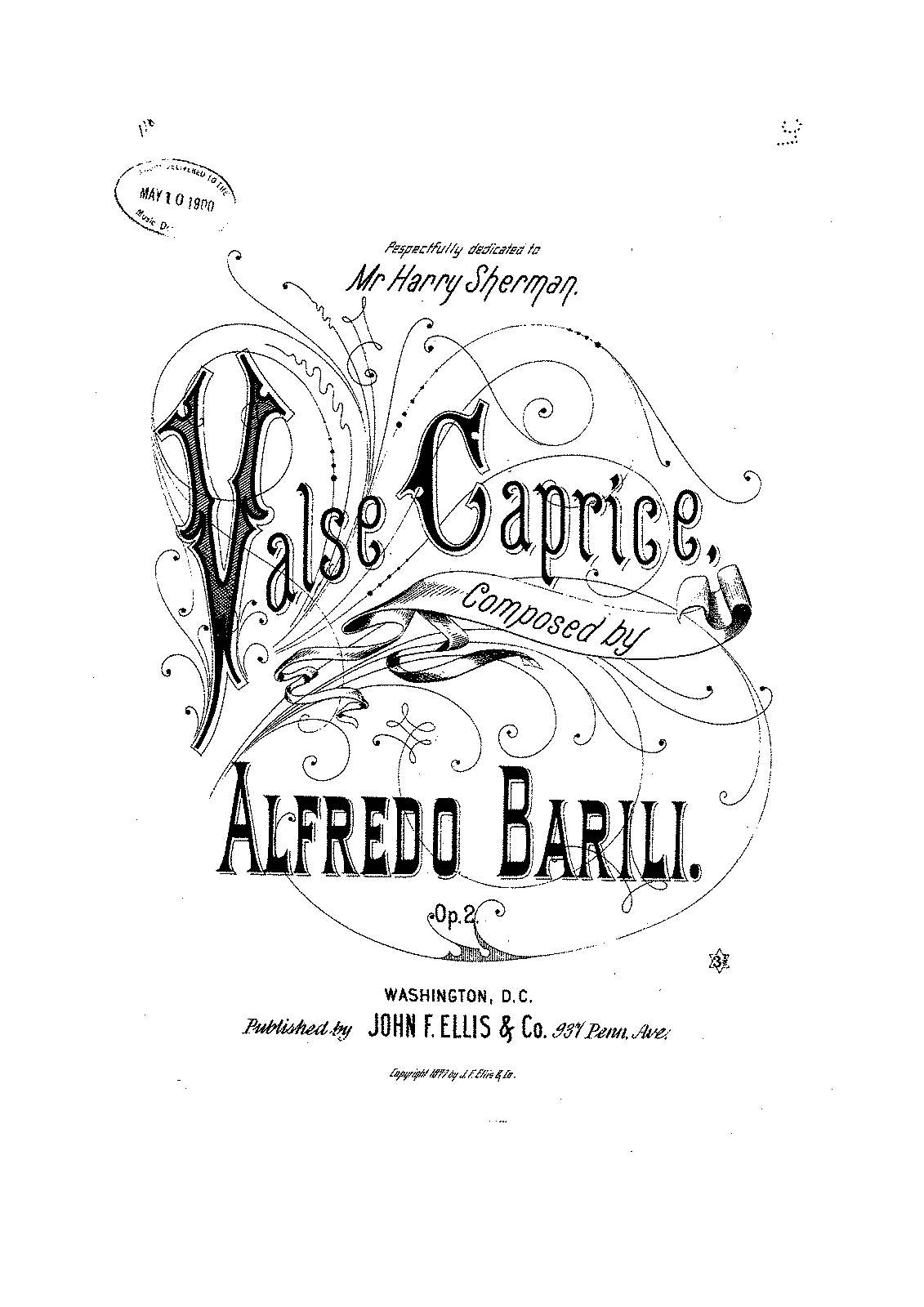 If they blanked the Paine work-page and filled it with their spam - that's vandalism and gets them permanently blocked. There was nothing accidental about such behavior. Carolus 05:25, 15 October 2010 (UTC)

Hi Eric, I'm afraid I have to disappoint you - Elevation and Offertory are the only pieces by that composer in the book. Harker's Collection is a kind of greatest hits arranged for Harmonium. So I was particularly pleased to find them there at all. Best wishes! --Ralph Theo Misch 22:05, 17 October 2010 (UTC)

Ok Eric, I'll remember the page for deletion. Valses Intimes was already uploaded by Morel. Don't hesitate, next time, to use your french language, If you can. It's very pleasant for me to read those odd expressions (and I don't mock) Squin 14:07, 19 October 2010 (UTC)

I think they were bought out by Leduc sometime shortly after 1900. They were mainly an organ music publisher. I think the series that the MacMaster pieces were part of was started by them and continued by Leduc. Yet another obscure French publisher for whom info is pretty scarce. Carolus 20:59, 20 October 2010 (UTC)