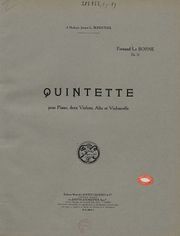 Instrument maker and publisher founded by Paul Evette and Ernest Schaeffer in January of 1885, after their purchase of the instrument maker Buffet-Crampon from Pierre Goumas. The publishing concern may have been part of the purchase, as Goumas had been publishing band music under his own name (as "P. Goumas et Cie.") since 1875. The company was dissolved in 1929 with the retirement of Evette's son Maurice. The majority of the catalog revolves around wind instruments. In the 1920s it published popular songs and piano pieces.