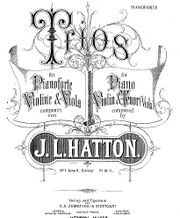 Gustav Adolf Zumsteeg (1794-1859) was a son of the famous composer Johann Rudolf Zumsteeg (1760-1802), a friend of the poet Schiller. He took over his widowed mother’s music store in Stuttgart in 1825, started publishing in 1828 and opened a lending library in 1830. He was involved in the spread of choral singing in Swabia, founding the Stuttgarter Liederkranz in 1824 and the Swabian Choral Federation (schwäbischen Sängerbund) in 1849. Upon the founder's death the firm passed to Rudolph Zumsteeg who sold it in 1875 to Gustav Adolph Zumsteeg.

Zumsteeg published mainly choral music, with some organ and piano works. One exception was the piano trios of John Liptrot Hatton (1883, 1885). Zumsteeg also published some of Victor Herbert’s early works, such as Suite for Cello and Orchestra, Op.3 (of which the Serenade (Andantino grazioso) movement was popular and much arranged), in the 1880s when he was active as a cellist in Stuttgart, before he emigrated to the United States in 1886. The firm was sold to Hans Sikorski in 1940.

G.A. Zumsteeg's plate numbers appear to have been issued in a fairly regular chronological fashion. Dates in italics are estimated. Plate numbers are in the format of G.A.Z. #### (early plates may appear without a prefix).