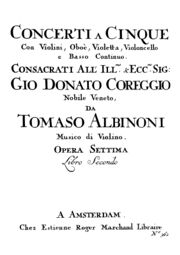 Estienne Roger (ca.1664–1722) was an Amsterdam-based music publisher of the 18th century. His firm was as important as Walsh of London, Telemann of Hamburg, and Boivin of Paris in the distribution of Baroque printed music.

Roger and his family moved from their native Caen, Normandy, France, in 1685 due to their Protestantism. The revocation of the Edict of Nantes in 1685, banning Protestantism in France, led to Huguenots emigrating to many European countries. Roger only started his apprenticeship in printing in 1691. He was publishing music by 1697. In his will, Roger designated his eldest, Jeanne (1692–1722) to succeed him in business. From 1716 on (when the will was made), her name was the imprint used..

After this first phase of the company's history we find a hiatus. There followed a spate of deaths in the family. Upon Roger's death in 1722, Jeanne kept up the business but died soon after him, having cut her younger sister out of her will. She left the business to an employee, Gerrit Drinkman. He too died quickly. The younger sister (Francoise) had her husband, who owned a rival business, take over the Roger enterprise but Francoise also died soon after.

A period of stability started around 1723. Francoise Roger's widower, Michel-Charles Le Cène (1684-1743), like Roger a Huguenot from Normandy, continued in the printing business for 20 years (1723-43). He made frequent reimpressions of Roger plates. Upon his death, the stock was purchased by De La Coste..

To summarize the firm's achievements, in the course of 47 years (1696-1743), the Roger firm printed over 600 titles — only 100 of which were original Le Cene issues. The editions were renowned for quality of engraving and accuracy of print. Roger, however, was a notable pirate who mainly re-engraved the editions of others, instead of contacting composers directly. Thus, he had a very international stock, and distribution too with agents in Belgium, Germany, England (notably John Walsh), and France. Roger was also the first music publisher to number his editions. This commenced in 1716 with numbering his stock randomly; thereafter all editions were numbered chronologically. He also printed catalogues from 1698 to 1716. Between these two factors, his publications are much easier to date than others of the era.

Composers published included Italians like Corelli, Vivaldi, Albinoni, Caldara, Marcello, A. Scarlatti, Torelli, Ceracini; Frenchmen such as Lully, Mouton, and Marais; and Germans such as Telemann, Handel, and Quantz. These editions include first editions of Vivaldi Opp.3-13 and the complete works of Corelli, including the famous edition of the Op.5 with ornaments written in. While Roger plagiarized prolifically, he had to deal with Pierre Mortier, who undercut many of his publications. However, when Mortier died, Roger acquired his stock and reissued many publications.

"The importance of the firm in the distribution of music in the first half of the 18th century cannot be overestimated."¹