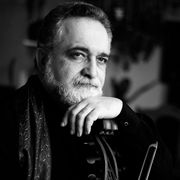 Grigor Arakelian has created a lot of arrangements and compositions for choir, folk and classical instruments while composing music solely derived from musical thinking of Komitas (founder of Armenian classical music in the beginning of 20th century) and guided by the old Armenian musical system. In 1993, with the help of luthier Martin Yeritsian he created a new type of djut: the tav (tenor) djut or Armenian viola, which has a unique sounding typical to Armenian spiritual music. This musical instrument has been used on many stages of the world to present such gems of Armenian medieval music as the arrangements of Grigor Narekatsi (10th century) “The Gem Rose” and “Eyes like the Sea” Taghs, Mesrop Mashtots’s (5th century) Repentance Psalms, etc. In 2005 he created the medieval Armenian music “Oshakan” ensemble, which gained popularity among the ancient music lovers of Europe, having outstanding performances in Paris “Radio France”, in Monaco Central Cathedral, and at the opening of Marseilles “La Majeur” Cathedral. From 2012 he started several new projects with new Armenian violins, viola and cello (created by M.Yeritsian). With string quintet “Les Violons d'Arménie” he gives a series of concerts with French, Italian and English Baroque music. He cooperates with different orchestras and choirs as a conductor, presenting his new arrangements and compositions based on Armenian ancient and medieval music, as the National Chamber Orchestra of Armenia, Symphony and Chamber orchestras of Opera Theater of Yerevan, Ensemble Parnassus in Netherlands, choir VivaVoce in Montreal, University Choir of Moncton (Canada). In present he performs on Armenian viola and conducts different kinds of music, from Armenian medieval to European baroque and romantic, and also Armenian contemporary.

The following 19 pages are in this category, out of 19 total.

Collections by or with: Arakelian, Grigor

The following 1 pages are in this category, out of 1 total.

The following 10 pages are in this category, out of 10 total.

The following 13 pages are in this category, out of 13 total.