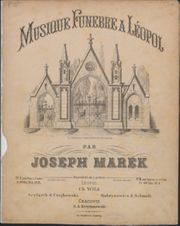 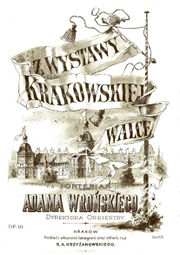 Stanisław Andrzej Krzyżanowski started a bookshop in Floriańska Street in Kraków in 1869. Before long he was also distributing magazines and running a lending library, employing 50 people. He published academic books in conjunction with the Jagiellonian University. In 1875 he moved to the Rynek Glowny, Kraków’s famous main square and started a music lending library.

Krzyżanowski played a major role in both the literary and musical life of the city, promoting concerts in the Hotel Saski, where the performers included Anton Rubinstein, Johannes Brahms, and Ignacy Jan Paderewski. From 1882 the firm published music, mainly songs, piano pieces and dances by Jan Karol Gall, Adam Wroński, Władysław Żeleński, Gadowski, Zygmunt Noskowski, and Stanisław Niewiadomski. The period from 1880 until 1914, known as the Young Poland period (Polish: Młoda Polska), was regarded by succeeding generations as a golden age of Polish culture. At that time Cracow was in Galicia, a province of the Austro-Hungarian Empire. Galicia stretched across the Northern Carpathian foothills from Cracow, (Krakau in German, now Kraków in Polish) in the West to Lvov (Lemberg in German, now Lviv in Ukranian) in the East.

In 1908 Stanisław’s son Marian Krzyżanowski took over the store. He was a music enthusiast who published over 400 works by Polish composers. The founder finally died in 1922, but the name of the firm was unchanged. Although Poland finally achieved independence in 1918 after 123 years of partition, the interwar years were difficult for the company. In the war years (1939-45), under German occupation they published children’s books. After the war they were nationalized by the communist government, and all the music publishing side was transferred to the new Polskie Wydawnictwo Muzyczne. Marian Krzyżanowski died in 1964 and was succeeded by his daughter Barbara Łasińska. She handed it over to her colleagues Helena and Henryk Druć in 1972. The firm continued to operate until 2014 as a second-hand bookstore at 26 St. Thomas’ Street.