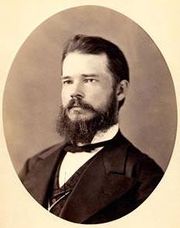 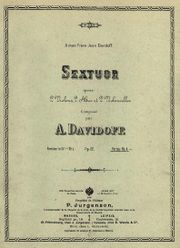 The firm of P. Jurgenson (in Russian: П. Юргенсон) was founded in 1861 by Pyotr Ivanovich Jurgenson (1836-1904). Born in Tallinn (then called Reval), Jurgenson worked as a music engraver from 1855 to 1859 for the St. Petersburg publisher F. Stellovsky, and later as house manager for the Moscow publisher C.F. Schildbach.

In 1861 Jurgenson founded his own music publishing company, with with the assistance of Nikolay Rubinstein (1835-1881, brother of Anton Rubinstein). In 1867, the company expanded to include a printing plant, and grew to take over numerous smaller Russian publishers, including M. Bernard (1885), K. Maykov (1889) and Y.A. Sokolov (1896). His brother Osip (or Josef) also had a music publishing and retailing business in St. Petersburg, and from 1880 he acted as Pyotr's agent in the Russian capital.

Pyotr Jurgenson was easily the largest music publisher in Russia long before his death in 1904. The firm was inherited by his sons Boris and Grigory but was ultimately expropriated by the Communist regime in 1918. The Jurgenson facilities at 14 Neglinny Prospekt thereafter served as the offices of the music division of the State Publishing House, known in various incarnations as Gosudarstvennoye Muzykalnoe Izdatelstvo, the acronym Muzgiz, or Muzyka. Many of their publications from the 1920s and early 1930s used Jurgenson's original plates.

Following privatisation in 2004 the company reverted to its original name of P. Jurgenson, although since 2016 it has been known as Muzyka once more.

Note: Jurgenson plate numbers were assigned in a regular ascending order for the most part. The list below gives ranges of numbers and corresponding year dates. In 1886, there was a huge jump due to the acquisition of St. Petersburg publisher M. Bernard the previous year.

This table is approximate; when better estimates can be had and sought, use them instead (e.g. if one finds an item in scanned issues of Hofmeisters Monatsberichte.)