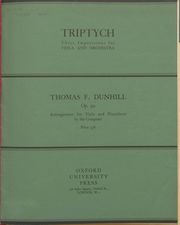 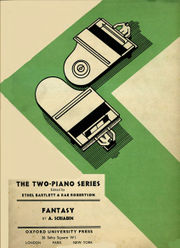 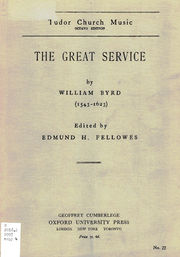 Oxford University Press published mainly academic books from the 16th to 19th centuries, culminating in the Oxford English Dictionary (1884-1928). However, in the early 20th century the Press, managed by Charles Cannan and Humphrey Milford (1877–1952),(father of the composer Robin Milford (1903-59)), expanded its activities in many ways, one of which was moving into commercial publishing. Accordingly, a music department started in 1923, managed for its first 18 years by Hubert J. Foss (1899-1953). His successor was Norman Peterkin.

Milford wisely started by buying the The Anglo-French Music Co., a successful publisher founded only ten years before, to get a toehold in the business. Soon most of the major English composers of the day were recruited: Ralph Vaughan Williams, William Walton, Constant Lambert, Alan Rawsthorne, Peter Warlock (Philip Heseltine), Edmund Rubbra and others.

It published several different series. Renaissance choral music was important: Tudor Church Music edited by Fellowes. Modern choral music has also been published: the Oxford Choral Songs and Oxford Church Music series with works by George Dyson, Ernest Walker, Dieren, Farjeon, Frank Bridge and Howells. Piano and organ music is covered with the composers Swinstead, Vaughan Williams and Willan. Since 1945 the most successful publication has been the Carols for Choirs collection, starting in 1961. Unlike many other music publishers it has remained independent to the present day and has a wide-ranging catalog of vocal and instrumental works and books on music. Its most famous book is The Oxford Companion to Music (1st ed 1938, 10th ed 1970) by Percy Scholes (1877-1958).

See also the Wikipedia article with detailed section on the music department.