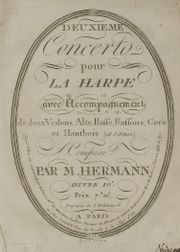 Naderman was a major Parisian publisher of the classical era, active for 50 years from 1774.

Jean-Henri Naderman was born in Freiburg in 1734. He arrived in France and then married his first wife Marie-Elisabeth Maheux on November 25, 1764 (she died in 1776). His advertisements from 1773 indicate he was a luthier, and by 1774 he is listed as a music merchant. His first privilege was granted on November 7, 1777. On June 20, 1780, he married his second wife Barbe-Rose Courtois. In 1796, Naderman purchased the stock of the publisher Boyer and occupied his store at "rue de la Loi passage de l'Ancien cafe de Foi." For slightly over a year Naderman had two stores, finally turning his original store at Rue d'Argenteuil into his home.

After his death on Feb. 4, 1799, his wife Barbe-Rose assumed control of the business. Due to financial difficulties, she sold the remaining Boyer stock. She continued the business relationship Boyer had set up with his mother-in-law, Mme. Lemenu (widow of the composer Christophe Le Menu de Saint-Hilbert) - their names are often listed together on imprints between 1796 and 1802. In 1801, Mme. Naderman purchased 901 plates from Alexandre-Louis de La Chevardière, and in 1802, she purchased the stock of Mme. Lobry. Until 1801, Mme. Naderman continued to use just the surname for imprints. Beginning in April 1801, she used a variety of names preceding the surname: Madame, Madame Veuve, Veuve, and sometimes "Naderman, éditeur de musique et facteur de harpes."

Jean-Henri Naderman and his second wife Barbe-Rose had two sons, Jean-François-Joseph (1781-Apr. 3, 1835) and Henri-Pascal (Feb. 2, 1783-Aug. 1, 1841), who were somewhat involved in the publishing business but who was primarily active in the part of the firm that sold harps. Naderman was involved in composition; upon obtaining a position at the Conservatoire in 1825, he ceased involvement with publishing altogether. No new publications appeared after 1825, and the last registration in the firm's name appeared in October 1828.

Naderman's earliest publications lack plate numbers. They begin to appear with irregular ordering until 1798-1799 when they begin to follow order.