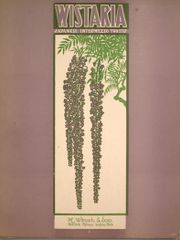 The firm of Marcus Witmark & Sons was established in New York City in 1886. Father Marcus Witmark was the legal head of the company, but from the beginning it was run by his sons Isidore, Julius, and Jay, who were under legal age when the company started (ranging in age from 17 to 14 years old). The started out publishing their own compositions. They were adept at plugging songs, and within a few years were publishing the works of such composers as Victor Herbert, George M. Cohan, Ben Harney and John Walter Bratton.

Witmark originated the practice of giving free "professional copies" of their new music to famous and established singers and bands, which proved so successful an advertising method that it was copied by the rest of the music publishers. After 1891, when a series of treaties between the United States and several European countries (Great Britain, France, Germany, and Austria, among others) was ratified—resulting in U.S. protection for works published in those countries as long as they were published in compliance with the notice requirements of U.S. law—Witmark pioneered publishing versions of British music in the United States and arranging for American hits to be published in the UK

In 1929 M. Witmark was purchased by Warner Brothers.

Witmark & Sons' plate numbers are in the format of ####. Dates in italics are estimated.