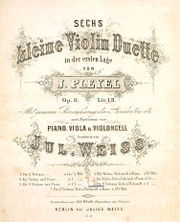 Julius Weiss (1814—1898) a composer and arranger, after publishing his early works with other Berlin publishers, decided to found his own firm. Unusually, after the first five years he issued entirely his own works, and the firm continued from 1850 until 1900.

Weiss was more businessman than artist, and saw the enormous potential for supplying sheet music for domestic music making in the peaceful and prosperous conditions of Germany, Austria and beyond from 1850, not least because distribution was revolutionized by the construction of a railroad network. He published familiar operatic fantasies and popular dance, song and salon favorites in a bewildering number (up to 10 in the German edition, 24 in the later US edition) of different arrangements, technically well within the reach of amateurs. Another marketing idea was to publish long series with catchy titles such as Favorite Overtures (series of 50) Progressive Violin Duets, or Opera Pearls.

While he published mainly violin and string and piano arrangements in his own company, he issued many piano works with other Berlin publishers, mainly Schlesinger.