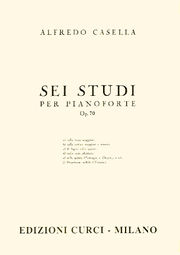 Curci is an Italian family-owned publishing company with an over 150 year history, mainly in popular music.

Francesco Curci started his music store in 1860, and soon began publishing scores of both classical music and Neapolitan popular songs. After the founder's death in 1912 his three children continued the business: Pasquale Curci as manager, Achille as engraver, and Concetta as administrator. Under Pasquale (1912-1938) the firm expanded, opening branches in 1932 in Rome and Milan. In the 30s the firm published many American successes linked to popular movies.

A new era began after Pasquale’s death in 1938, when three of his four sons Giuseppe, Alberto and Alfredo took over. Alberto (d.1973) and Alfredo were artistic advisors while Giuseppe, who had studied in London, was a businessman. Shortly after the war, in 1950, the company was given a new impulse by a family member by marriage, namely Giuseppe Gramitto Ricci, who had married Alfredo Curci’s daughter, Clotilde. He scouted out new talent, such as Domenico Modugno, who starred at the Sanremo Festival in 1958 and 1959. This singer's hit Volare (original title Il blu dipinto di blu) has become the Italian standard par excellence. He also co-operated with other publishers Accordo, Asso and Cervino, and launched a record label, Carosello, in 1960. From 1973 to 1998 Giuseppe Gramitto Ricci (d.2009) was the sole director of the company. On his retirement his son Alfredo Gramitto Ricci took over.