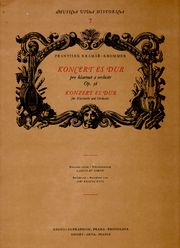 Supraphon is the most common name under which the Czechoslovakian state music publishing company was known. The origins of this firm go back to 1949 when Czech music publishers, among which Pazdírek, Urbánek, Hudební Matice, and Emanuel Starý, were nationalized. In 1951 some firms were brought together under Národní hudební nakladatelství Orbis (People’s own music publisher Orbis) while the imprint Hudební Matice remained also in use.

In 1953, Orbis became a self standing department of Státní nakladatelství krásné literatury, hudby a umění (SNKLHU, State Publishers of Literature, Music and Art). In 1955 the Dvořák Complete Edition was started. As early as 1956, the cooperation between Bärenreiter and Editio Supraphon began, when Karl Vötterle, the founder of Bärenreiter, was able to secure the rights for publishing Czech music editions in the western world.

In 1961 the firm was split into two firms, Státní nakladatelství krásné literatury a umění (State literature publisher) and Státní hudební vydavatelství (State Music Publishers). The latter became Editio Supraphon in 1967, but the name change was backdated to 1961. In 1978, Editio Supraphon and Bärenreiter started co-producing the Janáček Complete Edition. In the 1980s Bärenreiter printed licensed editions of works that were out of stock at Editio Supraphon.

After the fall of the Soviet and Eastern Bloc regimes, beginning in 1990, the music publishing part of the company was separated from the incorporated company and converted into a separate but still state-owned firm. It was privatized under the name of Editio Praga in 1993 and ceased to exist in 2000.

The critical editions of older composers such as Dvorak and Smetana produced by Supraphon more than 30 years ago are public domain in the EU due to the 93/98 EU Copyright Directive. As explained elsewhere, these editions - even those less than 30 years old - are most likely ineligible for copyright status in Canada due to both a failure to meet the "threshold of originality" and their status as government publications produced by state employees. However, IMSLP voluntarily observes a 25-year term for all such editions - including those issued by Supraphon. Most of these editions are likewise free in the USA thanks to their PD status in the country of origin, absent or defective copyright notices, etc. Thus they have been reprinted extensively by Dover, Kalmus and others. In contrast, the works of more recent Czech composers - who died less than 50 years ago (70 years in the EU and in Canada) - are fully protected by copyright. On the other hand, the entire catalog of Hudební Matice has been in public domain since the sheet publishing house Supraphon ceased to exist, and there is no successor.

The nationalised Hudební Matice changed its H.M. imprint to H ####, which was continued by the respective state music publishers. Issues with prefix H.M., preceding the change to H ####, should still go in the Hudební Matice table.